Posted on 21 November 2017 by Christ the King Prayer Group 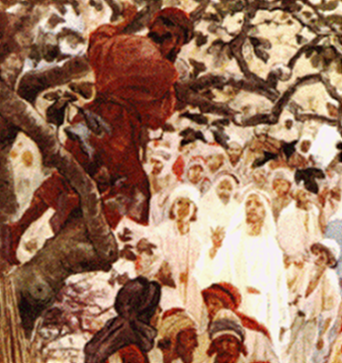 Zacchaeus was trying to see who Jesus was,

but on account of the crowd he could not, because he was short in stature.

So he ran ahead and climbed a sycamore tree to see Him,

because Jesus was going to pass that way.

Zacchaeus was a tax collector

and, as such, was hated by the people,

and seen as being guilty of abuses

and a collaborator of the despised Roman authorities.

No doubt moved by grace, he was certainly very keen to see Jesus,

and he did everything he could to do so,

shedding any kind of human pride or fear

and even risking the ire and scorn of the crowd – Jews and Romans alike.

Now I may feel far removed from Zacchaeus.

I may also think of myself as an upright Christian,

– like I may do for politicians or, say, my favourite football team or rock star?

Why is it that so many professed Christians

prevent them from publicly acknowledging their Lord and Saviour?

Is it a matter of “political correctness”?

Is it because we do not want to “offend” non- believers or people of other faiths?

Correctness in the secular, political realm is not the concern of Christians or the church

because “we are citizens of heaven, where the Lord Jesus Christ lives.

And we are eagerly waiting for Him to return as our Saviour.

He will take our weak mortal bodies and change them into glorious bodies like His own,

using the same power with which He will bring everything under His control.” – Philippians 3:20–21

It may be judged politically incorrect to say that Jesus Christ is the Way, the Truth, and the Life – but it is the truth!

forgive me for those occasions

…but I cowardly shied away,

for fear of criticism or repercussion.

How can I, Lord, acknowledge You as the Son of God,

without feeling elated and wishing to proclaim You

both by word and deed!

Jesus, please give me strength of character.

and fill me with a strong and ardent love for You.

This entry was posted in Spiritual. Bookmark the permalink.